The Life and Times of Joseph Godfrey

A Book About How the U.S. Army Brought Slavery to Minnesota in the 1800s

Author and retired attorney Walt Bachman’s historical research uncovered how the U.S. Army pay system fostered slavery in the 1800s at military installations in “free” states and territories, including Fort Snelling. Bachman’s research was inspired by stories he heard as a boy about his great-great grandfather Ernst Deitrich who was killed during an ambush by a group of Dakota men at the beginning of the U.S.-Dakota War of 1862. He learned that Joseph Godfrey, a black man, was accused of leading the ambush in which Deitrich was killed. Additional research revealed several unusual facts about Godfrey including:

Bachman’s research included interviews with a descendant of Dred Scott (of Dred Scott v. Sandford) and more than 50 visits to the National Archives to find thousands of federal pay records that refer to slaves kept by army officers. – most of which had never been reviewed. The result is his book, Northern Slave, Black Dakota: The Life and Times of Joseph Godfrey (Pond Dakota Press, 2013). 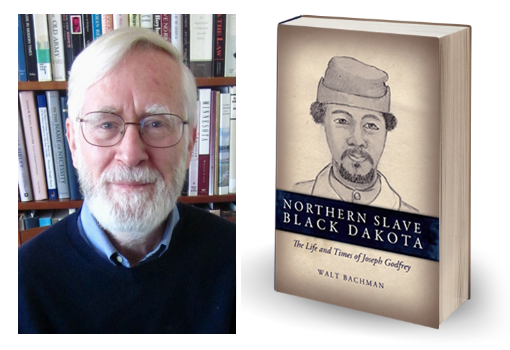 Walt Bachman’s is a retired trial attorney and author who has spent the last ten years researching and writing about Minnesota and U.S. Army history. His book, Northern Slave, Black Dakota: The Life and Times of Joseph Godfrey, was published in March 2013 by Pond Dakota Press, a division of the Pond Dakota Heritage Society. He is currently writing a second book which documents the U.S. Army’s role in fostering the spread of slavery in the 19th century via a pay system that reward federal officers for using slaves as servants in free states and territories. His family name is well-known in Minnesota through Bachman’s Inc., the nation’s largest retail florist which his great-grandfather, Henry Bachman, Sr. founded in 1885.